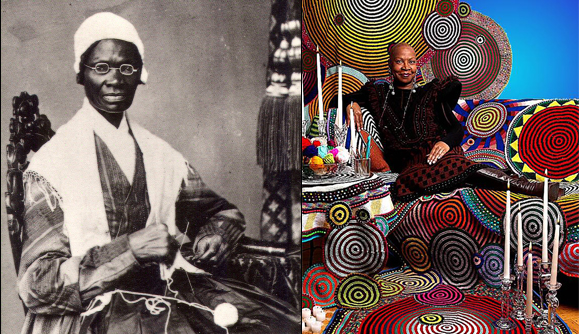 So do Latinas and Asians.

Pacific Islanders and Native Americans might not have a long history of knitting, but they’re definitely long-time weavers.

Based on some of the complaints around the pink hat aspect of last weekend’s Women’s March on Washington 2017, it might seem that knitting, weaving, and other fiber crafts are historically privileged-white-person pastimes, like tennis or skiing. Not so.

On the contrary, much of the appeal of fiber crafts is easy access to people of all classes and cultures all across the globe. Africa, like many countries, has been home to centuries of weaving traditions by indigenous tribes in western countries such as Ghana, Benin, Mali, Nigeria, and Burkina Faso, and in the more southern countries Tanzania, Zambia, and South Africa. Knitting specifically is believed to have begun in the Middle East, in Egypt (an African country, certainly, but culturally and ethnically Caucasian). Cotton production originated in India and Pakistan, and China began cultivating the silkworm in 4000 BCE. It is true some of these skills were brought to the new world along with colonization and the slave trade, but, again, weaving skills were already present in Native American populations.

Not only to do our sisters of color knit, they crochet, felt, weave, embroider, sew, quilt and cross-stitch (see this blog post, and this blog post by Gaye Glasspie). Women of all ethnicities are hella fiber-crafters. These ways of expressing ourselves creatively, using simple tools, materials and skilled use of our hands and fingers to make yarn and fabric occupy the untouchable realm of art, even if sometimes those creations happen under duress. Or perhaps, items created under duress are even more ‘artistic’. Art is, and always has been, a refuge.

However, even though we’re all crafting up a storm, the events of this past weekend have brought it home to me we’re doing it in a self-segregated fashion. Time to change that. A knit stitch and a purl stitch do actually look the same, no matter who makes them.

The subtle and not-so-subtle divisions within the third-wave feminist movement are legitimate concerns. And, it’s true, not every white woman who marched on Jan 21 is aware of the divisions. But those who chose not to wear a hat are not marginalized from fiber-crafting, and not everyone who did wear a hat is insensitive to ethnic and racial inequality within the equality movement.

The problem isn’t the hat. Come on over and let’s craft while we talk about it.